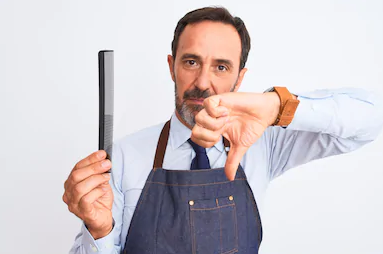 Considering that your barber among all the world’s hair stylists dedicate their lives to making you a better-looking person, their good side is a fruitful place to be. And when you think about the fact that they’re regularly coming at you with sharp objects, having your hair stylist “like you” can even make for good pre-emptive self-defence.

So we asked an array of folks in the business to tell all—confess what, exactly, annoys them about the person sitting in their hydraulic chair.

Before we get to the juicy stuff, the fine barbers and hair stylists we asked to confess their client’s bad habits wanted us to let you know that there is no crisis of manners happening in salons across the world. Actually, they say 99% of you are really good at sitting there and getting your haircut (though it’s not that hard so don’t congratulate yourselves quite yet).

“It’s really uncomfortable when their significant other is standing over your shoulder directing the cut,” says just about every barber from almost every city. Fair enough, nobody likes being micromanaged, so if your lady friend insists on controlling your hair, take notes, so you can explain what she wants yourself. Don’t think you can get away with a video chat either. “I find it insulting,” says a barber in a New York City men’s salon.
And, on a side note: if your trusty stylist is a woman and she’s even remotely attractive, once your girlfriend meets her, there’s a good chance you’ll never be allowed to go back. “It’s happened,” says a bombshell stylist out of NYC.

You keep your eyes open during a shampoo and/or shave. Totally understandable that it can be uncomfortable to be making eye contact with the stranger whose hair you’re lathering up, but shaving? Since there’s a razor being pressed so close to things like jugular veins, it’s a little more difficult to fight the impulse to keep your eyes open.

Don’t cut your own hair

Since you’re not five years old, it should go without saying that you shouldn’t cut your own hair, but even cleaning up your own neckline can be really frustrating. “I’ve seen crooked lines, chunks taken out and borders that have been taken up way too high, and they can be difficult to fix,” says a barber from San Francisco. A problem easily avoided since many barbershops will clean up your borders for less than a cost of a full cut. Just ask.

By all means bring in celebrity photos, but understand that, “We give haircuts, we don’t rearrange faces,” says a hair stylist based in Chicago. So basically, if you want Justin Timberlake’s hair, depending on what’s physically possible, you can pretty much have it, but that doesn’t necessarily mean it’ll bring your sexy back.

“I’m not saying that, as a rule, you shouldn’t talk to your stylist about the intricate details of your love life. If you have a very close and long relationship with that person, it’s fine. But if that’s the case the stylist usually knows your wife and likes her as well. Ninety-nine percent of the time the stylist will never say anything to her, but 99% will tell someone in the salon and it’s a small world,” says one NYC-based hair stylist. Consider yourself warned. Keep your personal life to yourself.

Unleashing a torrent of malodorous breath or body odour on any person in close proximity who is also holding scissors is not a good idea. It’s even worse when you’re depending on them to take their time to make you look good. “Do what you can to make your breath not stink, just don’t chew gum,” says a barber out of Austin Texas. Keep personal hygene levels to a max, I recently discovered some amazing sweet, tangy and citrusy fragrances from Hairbond United Kingdom‘s new shower trio to leave your hair and skin smelling super fresh. Fantastic prices for Hairbond products as well! You can check out their body wash here

There’s a sharp object near your face and you squirming only distracts the person holding it. This annoys your barber and could turn out poorly for your ear.

So that’s it. The top key points which really grind your barbers gears.