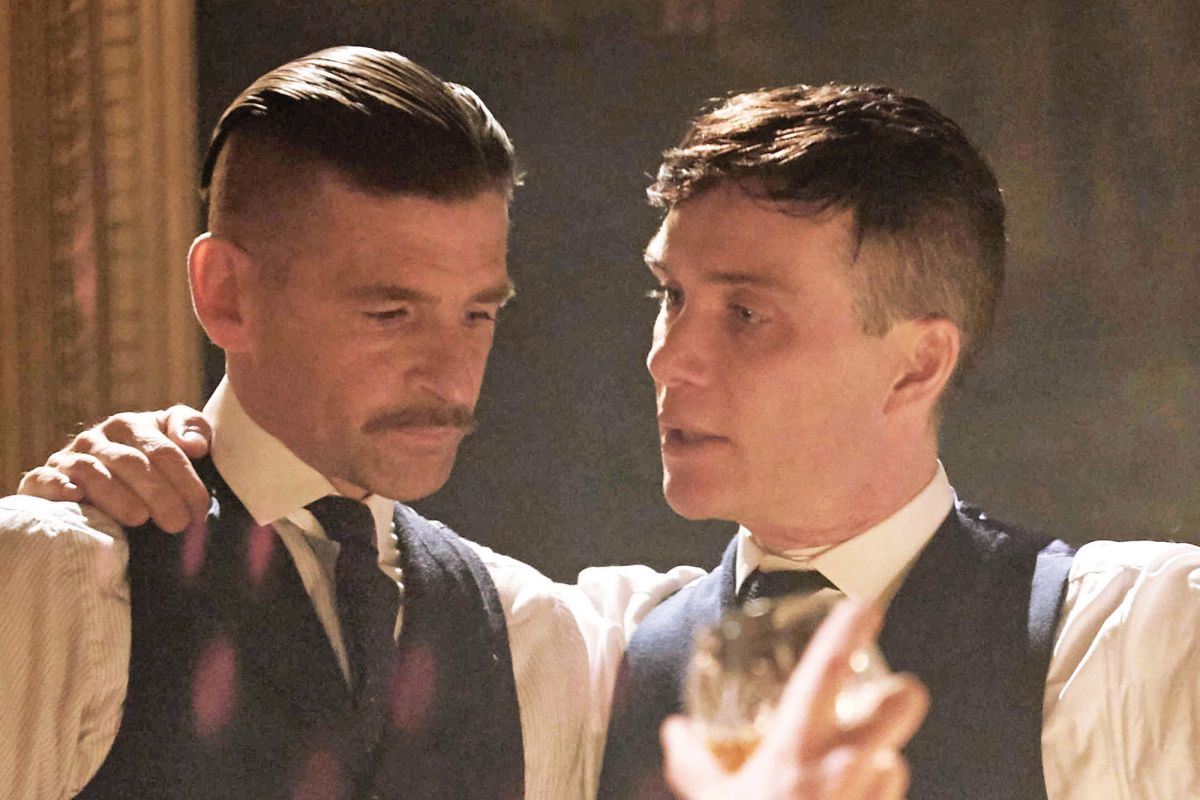 Tom Hardy and Cillian Murphy, razor-sharp suits and bloody good haircuts across the board the BBC drama Peaky Blinders had us gripped.

It is about a gangster family running a crime racket in Birmingham just after the First World War.

It took about a week to convince the cast to chop off their hair for the now-iconic, period-style haircut. Iddo Goldberg (who plays Freddie Thorne) claims he went under the razor first – which encouraged the ‘Peakies’ to copy him. One of the main points of reference for the look came from the book Crooks Like Us by Peter Doyle: a compilation of portraits of criminals by the Sydney police from the 1920s, but the style is also partly inspired by military haircuts and nods to earlier historical eras.

Whereas the Peaky Blinders outfits – all herringbone coats and baker boy hats – have understandably become popular off-screen, Schiavo is still baffled by the popularity of the hairstyle: “It’s strange, when I first did it, the boys wanted to wear hats to hide it, but now they don’t need to as everyone is wearing it.”

Off-screen, the appeal lies in the fact that the harsh back and sides shows off your bone structure (or beard) and the high contrast between the style on top of your head is a guaranteed head-turner. Plus, undercut hairstyles and fade cuts of various kinds have been a barbershop favourite since before Peaky Blinders started.

What Is The Peaky Blinders Haircut?

When we first meet mob boss, Thomas Shelby (Cillian Murphy), he’s returned to Birmingham from the hell of the trenches. His hair is worn in a “disconnected, unblended style that is very short and sharp” says Schiavo. It also draws on the styles worn by the ‘sloggers’ or hooligans from the late 1890s.

While most of the characters have harshly shaved backs and sides, the style on top varies. Some wear the Peaky Blinders haircut with a simple side parting, some with a textured French crop, some with a quiff and some with slicked-back hair. This versatility is probably the other reason in became popular IRL.

The gang mentality was important to get across too, as Schiavo, explains: “In the post-war era when ‘Peaky world’ is set, they used to shave their heads because of lice.” Yes, this hipster-friendly haircut had a very practical, rather grim function of helping prevent the spread of lice between troops and within the poverty-stricken population at home.

“But the look I was after when I designed the cut for the series, was so you only saw skin when the boys were wearing hats,” she says. “This is so you only really see the individual character when he removes his hat.” This effect presumably would also have made it harder for witnesses to identify a gangster if he got caught in the act.

What To Ask For

Observing the cast members should give you an indication of which look will work best for your own hair type. The series is so popular, your barber will probably be familiar with the look, but in essence, you need to ask for a disconnected undercut with no fade.

“You need to be confident about going really short on the back and sides,” says Joshua Gibson, principal at the Sassoon Academy in London. “Decide whether you want to wear the hair away from the face or closer to the head in length and worn forwards.”

Arthur Shelby (Paul Anderson), often the most violent character, has the most extreme undercut to match. Ideally you need straight, fine hair to do this, with a long section left at the top that he wears slicked back. Trying to be the respectable face of a ‘legitimate’ enterprise, Tommy himself wears it in a slightly softer crop pushed forward over his face and swept to one side. Younger brother John Shelby (Joe Cole) wears his parted straight into short, slick curtains.

Assuming you won’t be hiding it under a flat cap, Gibson says the best way to style it for your hair type: “If you have a straighter hair texture you might be better to dress the hair away from the face using a pomade or wax and use a Tangle Teezer to avoid comb marks for extra sleekness.” Frizzy hair types will benefit from a light oil such as Illuminating Oil by Sassoon Professional to keep it sleek.

Gibson also recommends a textured product like a paste to bulk up blonde, fine or receding hair. With a styled look such as this, he also recommends using Nioxin Cleanser 2 to prevent build-up from using heavier product. The ‘Arthur’ and the ‘John’ require a styling pomade that adds both high sheen and hold and the ‘Tommy’ requires texture with a matt finish.